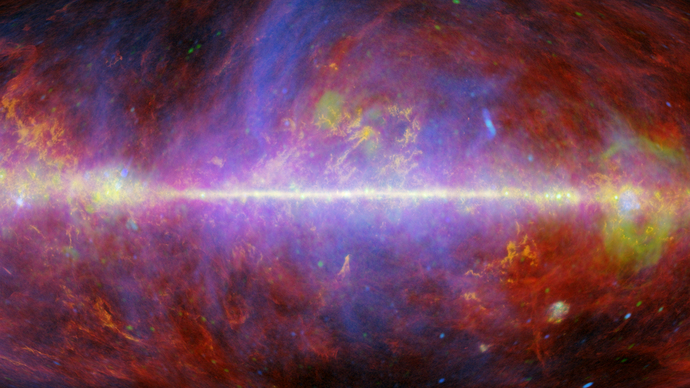 Hot gas, dust and magnetic fields mingle in a colorful swirl in this new map of our Milky Way galaxy. The image is part of a new and improved data set from Planck, a European Space Agency mission in which NASA played a key role.

Planck spent more than four years observing relic radiation left over from the birth of our universe, called the cosmic microwave background. The space telescope is helping scientists better understand the history and fabric of our universe, as well as our own Milky Way.

"Planck can see the old light from our universe's birth, gas and dust in our own galaxy, and pretty much everything in between, either directly or by its effect on the old light," said Charles Lawrence, the U.S. project scientist for the mission at NASA's Jet Propulsion Laboratory in Pasadena, California.

The new data are available publicly Feb. 5, and now include observations made during the entire mission. The Planck team says these data are refining what we know about our universe, making more precise measurements of matter, including dark matter, and how it is clumped together. Other key properties of our universe are also measured with greater precision, putting theories of the cosmos to ever more stringent tests.

One cosmic property appears to have changed with this new batch of data: the length of time in which our universe remained in darkness during its infant stages. A preliminary analysis of the Planck data suggests that this epoch, a period known as the Dark Ages that took place before the first stars and other objects ignited, lasted more than 100 million years or so longer than thought. Specifically, the Dark Ages ended 550 million years after the Big Bang that created our universe, later than previous estimates by other telescopes of 300 to 400 million years. Research is ongoing to confirm this finding.

The Planck data also support the idea that the mysterious force known as dark energy is acting against gravity to push our universe apart at ever-increasing speeds. Some scientists have proposed that dark energy doesn't exist. Instead, they say that what we know about gravity, as outlined by Albert Einstein's general theory of relativity, needs refining. In those theories, gravity becomes repulsive across great distances, eliminating the need for dark energy.