A Milky Way 'Mixer' Amongst the Stars 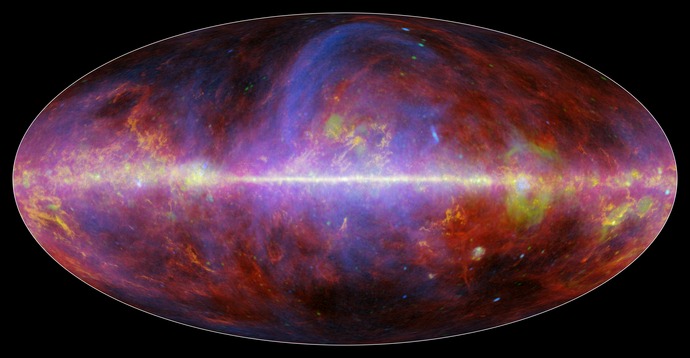 A festive portrait of our Milky Way galaxy shows a mishmash of gas, charged particles and several types of dust. The composite image comes from the European Space Agency's Planck mission, in which NASA plays an important role. It is constructed from observations made at microwave and millimeter wavelengths of light, which are longer than what we see with our eyes.

Planck is largely a cosmology mission with the goal of learning more about our universe -- everything from its age and contents to how it was born and how it will evolve in the future. The space telescope spent more than four years detecting the oldest light in the universe, which traveled billions of years to reach us. But that ancient light comes to us mixed together with light of similar wavelengths generated closer to home, within our Milky Way and other nearby galaxies. Scientists painstakingly subtract the Milky Way's light to isolate the ancient signals -- but this nearby light benefits astronomers too.

As the map demonstrates, Planck can detect a frenzy of activity in our Milky Way. Astronomers use maps like these to better understand the composition, temperature, density and large-scale structure of the material between stars, in addition to patterns of star formation throughout our galaxy and the role of magnetic fields.

In this view, different colors represent various materials and types of radiation. Red shows dust that gives off a thermal glow, and makes up the most abundant of the dust features shown. Yellow shows carbon monoxide gas, which is concentrated along the plane of our Milky Way in the densest clouds of gas and dust that are churning out new stars.

Blue indicates a type of radiation called synchrotron, which occurs when fast-moving electrons, spit out of supernovas and other energetic phenomena, are captured in the galaxys magnetic field. The electrons spiral along the magnetic field, traveling near the speed of light.

The green shows a different kind of radiation known as free-free. This occurs when isolated electrons and protons careen past one another in a series of near collisions, slowing down but continuing on their own way (the name free-free comes from the fact that the particles start out alone and end up alone). The free-free signatures are associated with hot, ionized gas near massive stars.