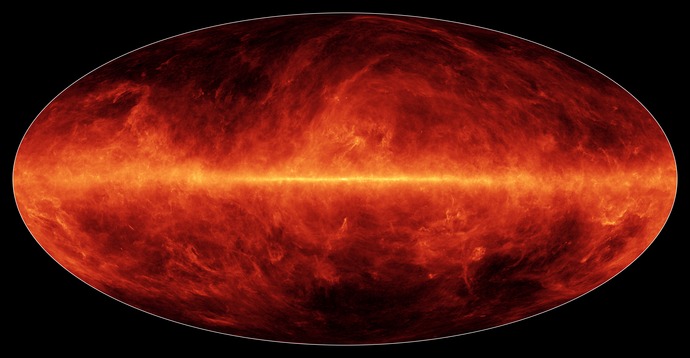 A new portrait of the Milky Way reveals the thermal glow of dust particles strewn throughout the galaxy. This image comes from the European Space Agency's Planck mission, in which NASA plays an important role. It is constructed from observations made at microwave and millimeter wavelengths of light, which are longer than what we see with our eyes.

Sooty dust fills the spaces between stars, clumped into filaments and clumps throughout the disk of our galaxy. While most of this dust is extremely cold, around 20 degrees above absolute zero (20 Kelvin) it is still warm enough to emit a faint glow in the infrared and microwave parts of the light spectrum.

The brightest part of this glow fills a narrow band along the galactic plane. This is the combined light from dust clouds that extend through to the far side of the galaxy. The fainter structures that fill the rest of the sky are clouds that are relatively close to our sun.