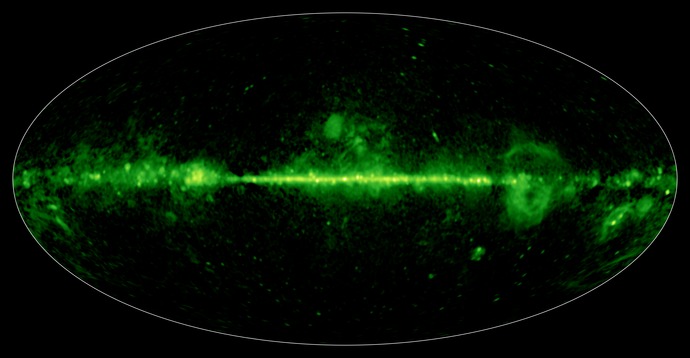 A new portrait of the Milky Way captures the light of free-moving electrons found near regions where hot, young stars are forming. This image comes from the European Space Agency's Planck mission, in which NASA plays an important role. It is constructed from observations made at microwave and millimeter wavelengths of light, which are longer than what we see with our eyes.

Large newly-formed stars radiate some of their light in the form of ultraviolet radiation. Surrounding hydrogen gas clouds are heated by this light, often shedding fast-moving electrons in the process. When these electrons careen past one another in a series of near collisions they often slow down but continue on their own way. This deceleration emits a particular spectrum of light, known as free-free since the particles start out alone and end up alone.

The free-free emission captured in this map traces hot regions of star formation found throughout the galaxy.