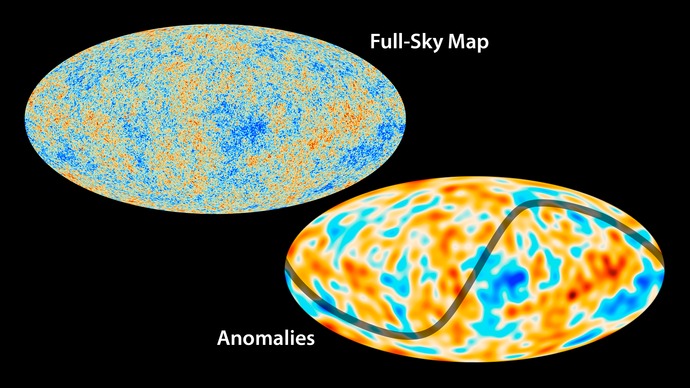 The Planck mission has imaged the oldest light in our universe, called the cosmic microwave background, with unprecedented precision. The results fit well with what we know about the universe and its basic traits, but some unexplained features are observed.

The top map shows Planck's all-sky map of the cosmic microwave background, whereas the bottom map shows the largest-scale features of the map.

One of the anomalies observed by Planck, and hinted at before by previous missions, is an asymmetry in the temperature fluctuations of the ancient light across two halves of our sky. Temperature variations are represented by the different colors, with red being warmer and blue, cooler. The extent of these variations is greater on the hemisphere shown at right than the one at left. This goes against the accepted simple model of our universe, which holds that the sky is the same in all directions. Scientists are in the process of incorporating these and other anomalies into their picture of the universe.