The Universe Comes into Sharper Focus 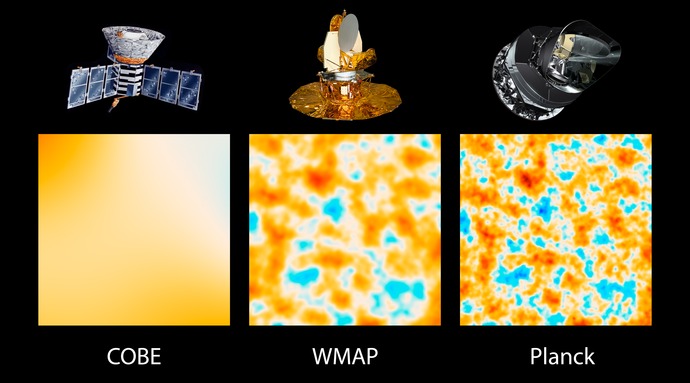 This graphic illustrates the evolution of satellites designed to measure ancient light leftover from the big bang that created our universe 13.8 billion years ago. Called the cosmic microwave background, this light reveals secrets of the universe's origins, fate, ingredients and more.

The three panels show 10-square-degree patches of all-sky maps created by space-based missions capable of detecting the cosmic microwave background. The first spacecraft, launched in 1989, is NASA's Cosmic Background Explorer, or COBE (left panel). Two of COBE's principal scientists earned the Nobel Prize in Physics in 2006 for the mission's evidence supporting the big bang theory, and for its demonstration that tiny variations in the ancient light reveal information about the state of the universe.

These variations, called anistotropies, came into sharper focus with NASA's next-generation spacecraft, the Wilkinson Microwave Anisotropy Probe, or WMAP (middle panel). This mission, launched in 2001, found strong evidence for inflation, the very early epoch in our universe when it expanded dramatically in size, and measured basic traits of our universe better than ever before.

The most advanced satellite yet of this type is Planck, a European Space Agency mission with significant NASA contributions. Planck, launched in 2009, images the sky with more than 2.5 times greater resolution than WMAP, revealing patterns in the ancient cosmic light as small as one-twelfth of a degree on the sky. Planck has created the sharpest all-sky map ever made of the universe's cosmic microwave background, precisely fine-tuning what we know about the universe.