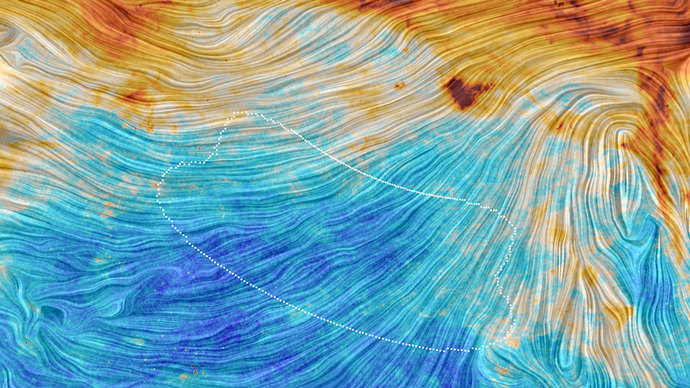 A joint analysis of data from the Planck space mission and the ground-based experiment BICEP2 has found no conclusive evidence of gravitational waves from the birth of our universe, despite earlier reports of a possible detection. The collaboration between the teams has resulted in the most precise knowledge yet of what signals from the ancient gravitational waves should look like, aiding future searches.

Planck is a European Space Agency mission with significant NASA contributions. BICEP2 and its sister project, the Keck Array, are based at the South Pole and funded by the National Science Foundation, also with NASA contributions.

"By analyzing both sets of data together, we could get a more definitive picture of what's going on than we could with either dataset alone," said Charles Lawrence, the U.S. project scientist for Planck at NASA's Jet Propulsion Laboratory, Pasadena, California. "The joint analysis shows that much of the signal detected by BICEP2/Keck is coming from dust in the Milky Way, but we cannot rule out a gravitational wave signal at a low level. This is a good example of how progress is made in science, one step at a time."

Planck and BICEP/Keck were both designed to measure relic radiation emitted from our universe shortly after its birth 13.8 billion years ago. An extraordinary source of information about the universe's history lies in this "fossil" radiation, called the cosmic microwave background (CMB). Planck mapped the CMB over the entire sky from space, while BICEP2/Keck focused on one patch of crisp sky over the South Pole.

In March of 2014, astronomers presented intriguing data from the BICEP2/Keck experiments, finding what appeared to be a possible signal from our universe when it was just born. If the signal were indeed from the early cosmos, then it would have confirmed the presence of ancient gravitational waves. It is hypothesized that these waves were generated by an explosive and very rapid period of growth in our universe, called inflation, which took place when the universe was only a tiny of a fraction of one second old.

Specifically, the BICEP/Keck experiments found evidence for a "curly" pattern of polarized light called B-modes. These patterns would have been imprinted on the CMB light as the gravitational waves slightly squeezed and stretched the fabric of space. Polarization describes a particular property of light. Usually, the electric and magnetic fields carried by light vibrate at all orientations equally, but when they vibrate preferentially in a certain direction, the light is polarized.

"The swirly polarization pattern, reported by BICEP2, was also clearly seen with new data from the Keck Array," said Jamie Bock of the California Institute of Technology in Pasadena, and JPL, a member of both the BICEP2/Keck and Planck teams.

"Searching for this unique record of the very early universe is as difficult as it is exciting, since this subtle signal is hidden in the polarization of the CMB, which itself only represents only a feeble few percent of the total light," said Jan Tauber, the European Space Agency's project scientist for Planck.

One of the trickiest aspects of identifying the primordial B-modes is separating them from those that can be generated much closer to us by interstellar dust in our Milky Way galaxy.

The Milky Way is pervaded by a mixture of gas and dust shining at similar frequencies to those of the CMB, and this closer, or foreground, emission affects the observation of the oldest cosmic light. Very careful data analysis is needed to separate the foreground emission from that of the CMB.

"When we first detected this signal in our data, we relied on models for galactic dust emission that were available at the time," said John Kovac, a co-principal investigator of the BICEP2/Keck collaboration at Harvard University, Cambridge, Massachusetts. "These seemed to indicate that the region of the sky chosen for our observations was relatively devoid of dust."

The BICEP2/Keck experiments collected data at a single microwave frequency, making it difficult to separate the emissions coming from the dust in the Milky Way and the CMB. On the other hand, Planck observed the sky in nine microwave and sub-millimeter frequency channels, seven of which were also equipped with polarization-sensitive detectors. Some of these frequencies were chosen to make measurements of dust in the Milky Way. By careful analysis, these multi-frequency data can be used to separate the various contributions of emissions.

The Planck and BICEP2/Keck teams joined forces, combining the space satellite's ability to deal with foregrounds using observations at several frequencies, with the greater sensitivity of the ground-based experiments over limited areas of the sky.

"The noise in the instruments limits how deeply we can search for a signal from inflation," said Bock. "BICEP2/Keck measured the sky at one wavelength. To answer how much of the signal comes from the galaxy, we used Planck's measurements in multiple wavelengths. We get a big boost by combining BICEP2/Keck and Planck measurements together, the best data currently available."

The final results showed that most of the original BICEP2/Keck B-mode signal, but not necessarily all of it, could be explained by dust in our Milky Way. As for signs of the universe's inflationary period, the question remains open.

The joint Planck/BICEP/Keck study sets an upper limit on the amount of gravitational waves from inflation, which might have been generated at the time but at a level too low to be confirmed by the present analysis.

"The new upper limit on the signal due to gravitational waves agrees well with the upper limit that we obtained earlier with Planck using the temperature fluctuations of the CMB. The gravitational wave signal could still be there, and the search is definitely on," said Brendan Crill, a member of both the BICEP2 and Planck teams from JPL.

A paper on the findings is still under peer review.

NASA and JPL developed detector technology for both the BICEP and Keck Array experiments, as well as for the Planck space telescope. JPL is managed by Caltech for NASA.