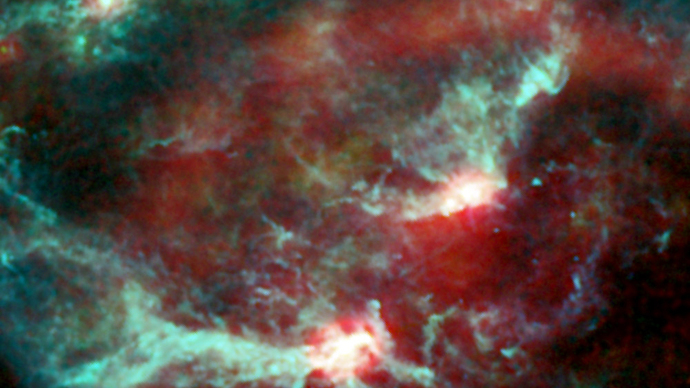 The big hunter in the sky is seen in a new light by Planck, a European Space Agency mission with significant NASA participation. The long-wavelength image shows most of the constellation Orion, highlighting turbid clouds of cold material, where new stars are being stirred into existence.

The Planck mission is busy surveying the whole sky at longer wavelengths of light than we can see with our eyes, ranging from infrared to even longer-wavelength microwaves. It is collecting ancient light from when the universe was very young, less than half a million years old, telling us about the birth and fate of our universe. In the process, the mission is gathering data on our Milky Way galaxy that astronomers are using to see through cold pools of gas and dust, which block visible-light views of star formation.

"Because Planck is mapping the whole sky, we can capture mosaics of huge regions of the Milky Way," said Charles Lawrence, the NASA project scientist for Planck at NASA's Jet Propulsion Laboratory in Pasadena, Calif. "We are seeing the coldest material in star-forming regions, where stars are at the very earliest stages of formation."

The picture shows light resulting from two different types of sources. At the lowest frequencies, Planck primarily maps emission from ionized gas heated by newly formed hot stars. At higher frequencies, Planck maps the meager heat emitted by extremely cold dust. This can reveal the coldest cores in the clouds, which are approaching the final stages of collapse, before they are reborn as full-fledged stars.