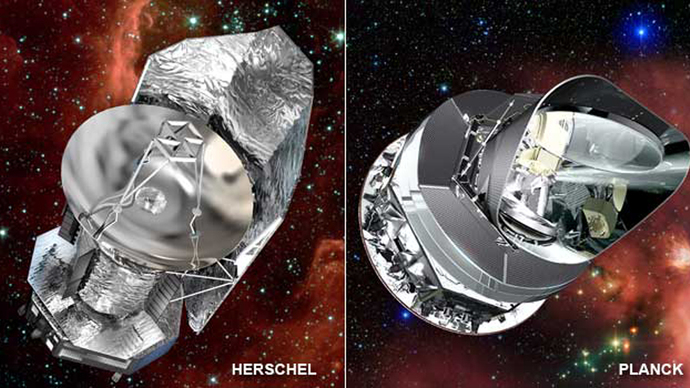 The Herschel and Planck project teams are this year's recipients of the American Institute of Aeronautics and Astronautics (AIAA) Space Systems Award. Both space missions were led by the European Space Agency (ESA), with important participation from NASA.

This award is presented annually by the AIAA to recognize outstanding achievements in the architecture, analysis, design and implementation of space systems. This year's award was presented Sept. 2 during the AIAA Space and Astronautics Forum and Exposition, in Pasadena.

The project teams of the Herschel and Planck missions, which were managed together by ESA, have been cited for "outstanding scientific achievements recognized by the worldwide scientific community and for outstanding technical performances of the two satellites."

The Herschel infrared space observatory, which operated from May 2009 until April 2013, carried the largest telescope ever built for a space observatory. Its 3.5-meter primary mirror collected long-wavelength radiation from some of the coldest and most distant objects in the universe. The observatory made more than 40,000 scientific observations over about 25,000 hours. Herschel's data are publicly available for use by astronomers across the globe.

Planck was launched into space with Herschel in 2009, and also operated until October, 2013. It was designed to probe, with the highest accuracy ever achieved, the remnants of the radiation that filled the universe immediately after its explosive birth. Data from Planck, also publicly available, are helping to provide answers to some of the most important questions in modern science: how did the universe begin, how did it evolve to the state we observe today and how will it continue to evolve in the future?

JPL contributed mission-enabling technology for instruments on both Planck and Herschel. The U.S. data archives for both missions are based at NASA's Infrared Processing and Analysis Center at the California Institute of Technology in Pasadena. Caltech manages JPL for NASA.