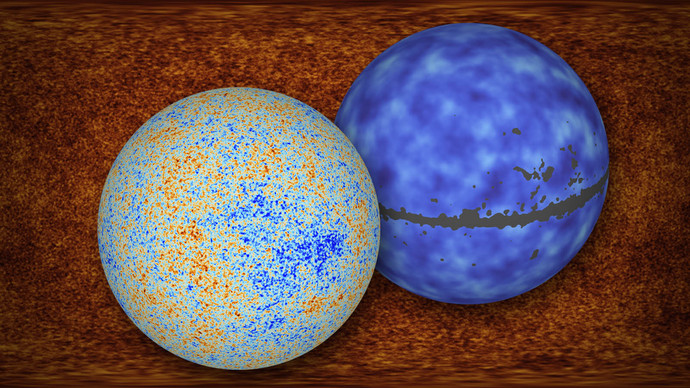 These maps are in an equirectangular projection suitable for projection onto a sphere, useful for full-dome presentations. The projection is in galactic coordinates with the galactic plane running horizontally along the midpoint of the image. Note that most generic 3D graphics software will map images to the outside of a sphere; since this is the inside projection looking outwards the image should be flipped horizontally when used with such software to create a sky dome to be viewed from the inside.
Two different color stretches of the cosmic microwave background (CMB) are available, as well as the mass map inferred from the CMB observations.
Both datasets are also available as layered Photoshop-compatible TIFF files. These include the sky maps in greyscale, allowing users to assign their own color maps. The mass map also includes a separate layer for the foreground mask.
Download layered CMB Map
Download layered Mass Map