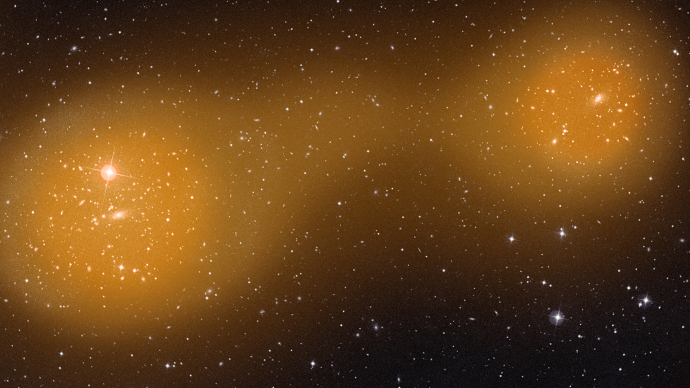 "Planck is helping to reveal hidden material between galaxy clusters that we couldn't see clearly before," said James Bartlett of NASA's Jet Propulsion Laboratory, Pasadena, Calif., a member of the U.S. Planck science team. Planck is a European Space Agency mission with significant participation from NASA.

The mission's primary task is to capture the most ancient light of the cosmos, the cosmic microwave background. As this faint light traverses the universe, it encounters different types of structure, including galaxies and galaxy clusters -- assemblies of hundreds to thousands of galaxies bound together by gravity.

If the cosmic microwave background light interacts with the hot gas permeating these huge cosmic structures, its energy distribution is modified in a characteristic way, a phenomenon known as the Sunyaev-Zel'dovich effect, after the scientists who discovered it.

Astronomers using Planck and the Sunyaev-Zel'dovich effect were able to discover a bridge of hot gas connecting the clusters Abell 399 and Abell 401, each containing hundreds of galaxies.

The presence of hot gas between the clusters, which are billions of light years away, was first hinted at in X-ray data from ESA's XMM-Newton, and the new Planck data confirm the observation.

NASA's Planck Project Office is based at JPL. JPL contributed mission-enabling technology for both of Planck's science instruments. European, Canadian and U.S. Planck scientists work together to analyze the Planck data.