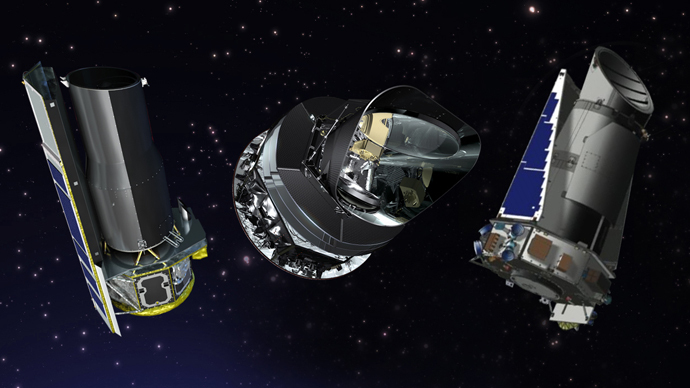 PASADENA, Calif. -- NASA is extending three missions affiliated with the Jet Propulsion Laboratory in Pasadena, Calif. -- Kepler, the Spitzer Space Telescope and the U.S. portion of the European Space Agency's Planck mission -- as a result of the 2012 Senior Review of Astrophysics Missions.

The 2012 NASA Senior Review report, which includes these three missions and six others also being extended, is available at: http://science.nasa.gov/astrophysics/2012-senior-review.

"This means scientists can continue using the three spacecraft to study everything from the birth of the universe with Planck, and galaxies, stars, planets, comets and asteroids with Spitzer, while Kepler is determining what percentage of sun-like stars host potentially habitable Earth-like planets," said Michael Werner, the chief scientist for astronomy and physics at JPL.

Kepler has been approved for extension through fiscal year 2016, which ends Sept. 30, 2016. All fiscal year 2015 and 2016 decisions are for planning purposes and will be revisited in the 2014 Senior Review. The extension provides four additional years to find Earth-size planets in the habitable zone -- the region in a planetary system where liquid water could exist on the surface of the orbiting planet -- around sun-like stars in our galaxy.

Spitzer, launched in 2003, continues to provide the astronomical community with its unique infrared images. It has continued to explore the cosmos since running out of coolant, as expected, in 2009. Among its many duties during its warm mission, the observatory is probing the atmospheres of planets beyond our sun and investigating the glow of some of the most distant galaxies known. As requested by the project, Spitzer received two additional years of operations. Like other NASA missions, the Spitzer team will be able to apply for a further extension in 2014.

NASA will fund one additional year of U.S. participation in the European Space Agency's Planck mission, for the U.S. Planck data center and for operations of Planck's Low Frequency Instrument. Planck, launched in 2009, is gathering data from the very early universe, shortly after its explosive birth in a big bang. Planck's observations are yielding insight into the origin, evolution and fate of our universe. The U.S. Planck team will apply for additional funding after a third data release has been approved by the European consortiums.

JPL manages the Spitzer Space Telescope mission for NASA's Science Mission Directorate, Washington. Science operations are conducted at the Spitzer Science Center at the California Institute of Technology in Pasadena. Data are archived at the Infrared Science Archive housed at the Infrared Processing and Analysis Center at Caltech. For more information about Spitzer, visit: http://spitzer.caltech.edu.

Planck is a European Space Agency mission, with significant participation from NASA. NASA's Planck Project Office is based at JPL. JPL contributed mission-enabling technology for both of Planck's science instruments. European, Canadian and U.S. Planck scientists will work together to analyze the Planck data.