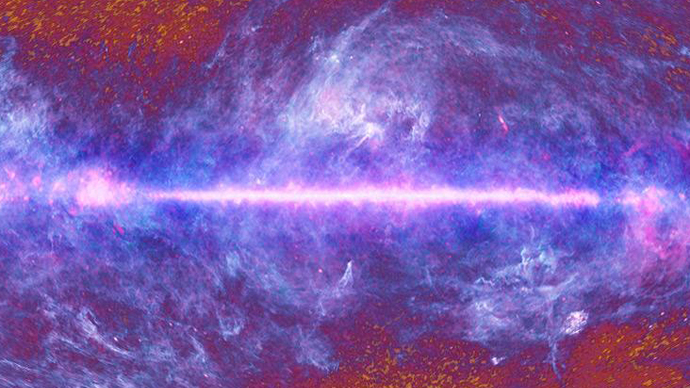 A new image from the Planck mission shows what it's been up to for the past year -- surveying the entire sky for clues to our universal origins. Planck, a European Space Agency mission with significant participation from NASA, has been busily scanning the whole sky at nine frequencies of light, with the ultimate goal of isolating fluctuations in the cosmic microwave background -- or light from the beginning of time. These fluctuations represent the seeds from which structure in our universe evolved.

"This image shows both our Milky Way galaxy and the universe 380,000 years after the Big Bang in one expansive view," said Charles Lawrence, the NASA project scientist for the mission at the Jet Propulsion Laboratory in Pasadena, Calif. "The radiation from the Milky Way traveled hundreds or thousands of years to reach us, while the radiation from the early universe traveled 13.7 billion years to reach us. What we see in this picture happened at very different times."

The picture has been color-coded to show how the sky looks over the range of frequencies observed by Planck. Planck detects light that we can't see with our eyes -- light with low frequencies ranging from 30 to 857 gigahertz. The disk of the Milky Way galaxy, seen edge-on from Earth's perspective, is the bright band running horizontally down the middle. Diffuse, huge clouds of gas and dust relatively close to us in our galaxy can be seen above and below this band. The cosmic microwave background is apparent as the grainy structure towards the top and bottom of the image.

Scientists want to study this grainy signature across the entire sky, which means seeing through the "fog" of our Milky Way. The Planck teams are busy now removing this foreground fog, a meticulous process akin to identifying and removing all the hay in a haystack to reveal the needle within. The process will take about two more years, with the first processed data being released to the scientific community toward the end of 2012. The U.S. Planck team is helping with this task, with a primary tool being the Franklin supercomputer at the National Energy Research Scientific Computing Center in Berkeley, Calif. One of the world's fastest computers, Franklin will handle the most computationally intensive analysis jobs for the Planck team worldwide.

Meanwhile, this fog is not something to discard. It contains a treasure trove of information about our galaxy and its structure, in addition to many other galaxies. The U.S. Planck team is responsible for releasing the first batch of this astronomy data, called the Early Release Compact Source Catalogue, an event schedule for January 2011.

Planck will continue surveying the sky until at least the end of January 2012, completing almost five all-sky scans.

Planck is a European Space Agency mission, with significant participation from NASA. NASA's Planck Project Office is based at JPL. JPL contributed mission-enabling technology for both of Planck's science instruments. European, Canadian, and U.S. Planck scientists will work together to analyze the Planck data.