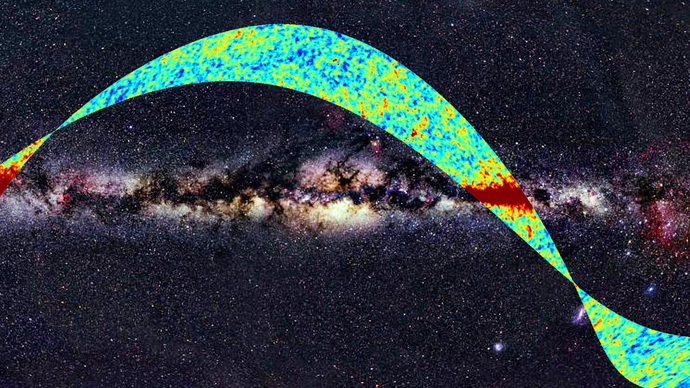 PASADENA, Calif. – The Planck mission has captured its first rough images of the sky, demonstrating the observatory is working and ready to measure light from the dawn of time. Planck – a European Space Agency mission with significant NASA participation – will survey the entire sky to learn more about the history and evolution of our universe.

The space telescope started surveying the sky regularly on Aug. 13 from its vantage point far from Earth. Planck is in orbit around the second Lagrange point of our Earth-sun system, a relatively stable spot located 1.5 million kilometers (930,000 miles) away from Earth.

"We are beginning to observe ancient light that has traveled more than 13 billion years to reach us," said Charles Lawrence, the NASA project scientist for the mission at NASA's Jet Propulsion Laboratory in Pasadena, Calif. "It's tremendously exciting to see these very first data from Planck. They show that all systems are working well and give a preview of the all-sky images to come."

Following launch on May 14, the satellite's subsystems were checked out in parallel with the cool-down of its instruments' detectors. The detectors are looking for temperature variations in the cosmic microwave background, which consists of microwaves from the early universe. The temperature variations are a million times smaller than one degree. To achieve this precision, Planck's detectors have been cooled to extremely low temperatures, some of them very close to the lowest temperature theoretically attainable.

Instrument commissioning, optimization and initial calibration were completed by the second week of August.

During the "first-light" survey, which took place from Aug. 13 to 27, Planck surveyed the sky continuously. It was carried out to verify the stability of the instruments and the ability to calibrate them over long periods to the exquisite accuracy needed. The survey yielded maps of a strip of the sky, one for each of Planck's nine frequencies. Preliminary analysis indicates that the quality of the data is excellent.

Routine operations will now continue for at least 15 months without a break. In this time, Planck will be able to gather data for two full independent all-sky maps. To fully exploit the high sensitivity of Planck, the data will require a great deal of delicate calibrations and careful analysis. The mission promises to contain a treasure trove of data that will keep cosmologists and astrophysicists busy for decades to come.

JPL is managed for NASA by the California Institute of Technology in Pasadena.