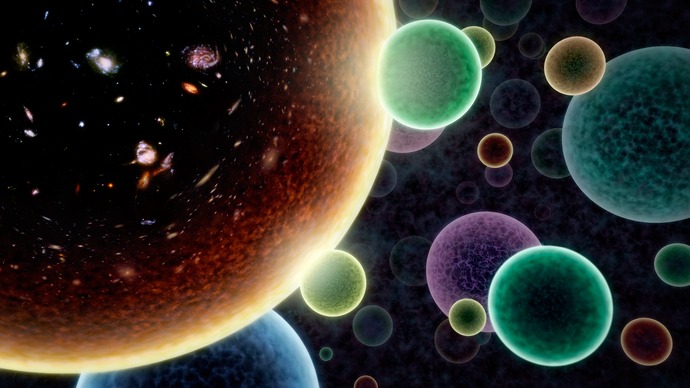 This artwork illustrates the concept of an alternate, "bubble" universe, in which our universe (left) is not the only one. Some scientists think that bubble universes may pop into existence all the time, and occasionally nudge ours. Some bubbles would inflate wildly, while others would collapse back on themselves. Our own bubble universe just happens to have the right amount of matter and other variables to endure and foster the creation of stars and planets.

Scientists using data from the European Space Agency's Planck mission, in which NASA played an important role, have tested this alternate universe concept. They have found hints that our universe may have been bumped by another universe very different from ours.

For the purposes of illustration, time increases from the outside of the bubbles towards the inside. The bright outer edge of our universe corresponds to the big bang. Inside of that, patterns of the Cosmic Microwave Background (CMB) become visible, while the current epoch of galaxies show up at the very center. Two smaller bubble universes can be seen nudging ours at early times, creating a faint signature that may have been detected in the Planck CMB maps.

More research is needed to confirm this hypothesis.