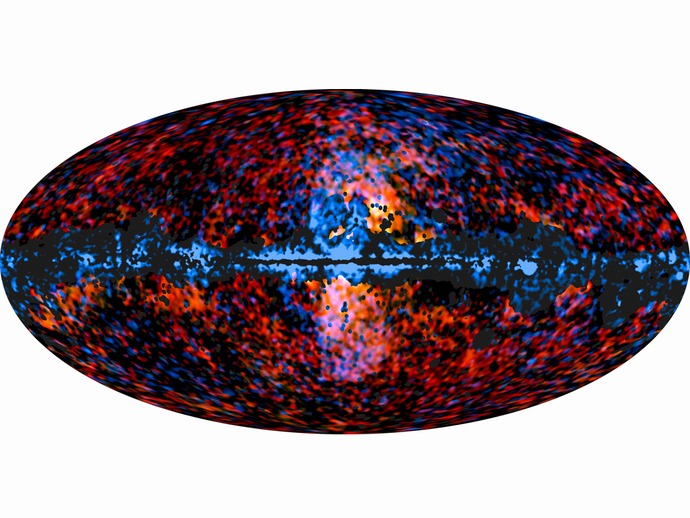 This all-sky image shows the distribution of the galactic haze seen by ESA's Planck mission at microwave frequencies superimposed over the high-energy sky, as seen by NASA's Fermi Gamma-ray Space Telescope.

The Planck data (shown here in red and yellow) correspond to the haze emission at frequencies of 30 and 44 GHz, extending from and around the galactic center.

The Fermi data (shown here in blue) correspond to observations performed at energies between 10 and 100 gigaelectronvolt and reveal two bubble-shaped, gamma-ray emitting structures extending from the galactic center.

Synchrotron emission, a type of non-thermal radiation generated by charged particles, associated with the galactic haze seen by Planck, exhibits distinctly different characteristics from the synchrotron emission seen elsewhere in the Milky Way. Diffuse synchrotron emission in the galaxy is interpreted as radiation from highly energetic electrons that have been accelerated in shocks created by supernova explosions. Compared to this well-studied emission, the galactic haze has a "harder" spectrum, meaning that its emission does not decline as rapidly with increasing frequency.

Several explanations have been proposed for this unusual behavior, including enhanced supernova rates, galactic winds and even annihilation of dark-matter particles. Thus far, none of them have been confirmed and the issue remains open.