Clumps of Cold Stuff Across the Sky 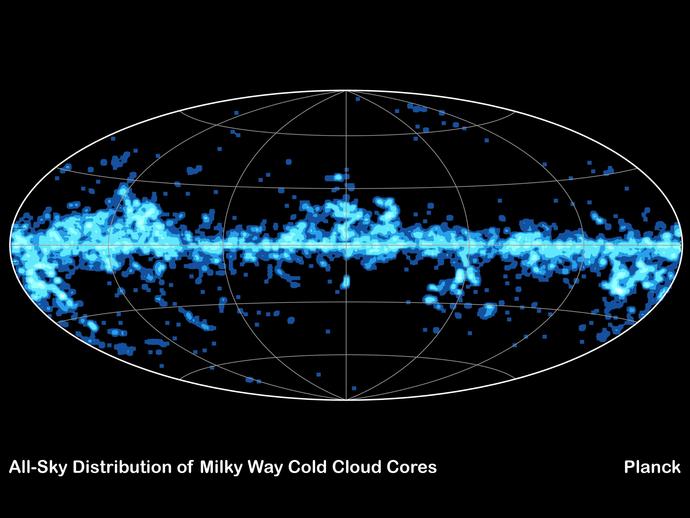 This map illustrates the numerous star-forming clouds, called cold cores, that Planck observed throughout our Milky Way galaxy. Planck, a European Space Agency mission with significant NASA participation, detected around 10,000 of these cores, thousands of which had never been seen before. Cold cores are chilly chambers of gas and dust where stellar embryos are just beginning to take shape. Some of the cold cores found by Planck are the coldest ever observed, as cold as just seven degrees above absolute zero, or minus 447 degrees Fahrenheit.

The blue data show the density of the cores, some of which are shaped more like clumps or filaments than spherical cores. Other missions, like the Herschel Space Observatory, can follow-up on the Planck discoveries, and see the structures in more detail.

Planck is an all-sky survey mission, scanning the sky at longer wavelengths of light, ranging from infrared to radio waves. Its ultimate goal is to measure the cosmic microwave background -- ancient radiation from the Big Bang that created our universe 13.7 billion years ago. But in the process of making these precise measurements, Planck is catching objects that lie in front of the cosmic microwave background -- objects like cold cores in our galaxy, in addition to distant galaxies.

About 1,000 of the cold cores observed by Planck are being released to the public Jan. 11, 2011, in the mission''s ""Early Release Compact Source Catalogue."" These are the best sources of the bunch, and the coldest.